What do Jon Lee Anderson and Martin Caparrós have in common with Gay Talese and Truman Capote? Are stories better thanks to data journalism? How can literature transform contemporary facts into pieces of art? Journalism XXI will try to answer these questions.

Experts in the field say that the article by Gay Talese, Frank Sinatra Has a Cold, is not only the best profile ever given of “The Voice”, but also one of the best ever written on what today we call a show business celebrity. It is also said that In Cold Blood by Truman Capote is a masterpiece of non-fictional journalism. And if we put the magnifying glass over something not so distant, we could be so bold as to say that El maestro Juan Martínez que estuvo allí, by Manuel Chaves Nogales, could be the best chronicle ever written in the Spanish language regarding the atrocities of the October Revolution.

These three examples serve to illustrate three original ways of doing journalism on subjects narrated to the point of tedium: the biography of a celebrity, murder, and a historical event. Undoubtedly, point of view and talent are the basic ingredients that make a text stand out above others. But there are other, no less worthy ingredients: closeness to and empathy with the character, or with the subject.

The new century has added a further ingredient to these: data. Now, more than ever, data journalism can be what marks the difference between one story and another. Or rather, it is the way of narrating this event with data that distinguishes it from the rest. 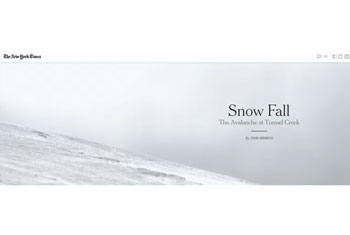 In February 2012, an avalanche trapped several skiers in Tunnel Creek, Washington. What was going to be a short news item among many others became an amazing multimedia report that amplified the information to offer all viewpoints and all the details on the tragic event. John Branch, the New York Times reporter responsible for the text, thus achieved that his news item stood out above all the others, thanks to his novel treatment of the information.

From that first example (which was not really the first, but which did mark a new point of departure), many others have appeared. The music magazine Pitchfork devoted an extensive report to singer-songwriter Bat for Lashes, Glitter in the Dark, with a multimedia design in which the images “came to life” as the page was scrolled, and including a playlist to listen to her music while reading the article. The History Channel presented, to coincide with the anniversary of D-Day, a spectacular website where 3D images of different battles were mixed with the real eye-witness reports of soldiers, descriptions of the arms used and interactive maps. And on another occasion, the British newspaper The Guardian created a story about the riots in London in 2011, based around rumours that originated on Twitter. The London Riots as shown in The Guardian

The Guardian was one of the first print newspapers to develop an interactive strategy to expand its contents and add information to the news published. The Catalan newspaper Ara, in contrast, was born when the digital era was in full swing and from the start had an interactives department from which it produced multimedia articles such as this one, devoted to the crises in Europe.

Specifically Carles Capdevila, director of Ara and one of the promoters of this new journalism model, more accustomed to the digital than the analogical, will be one of the guest speakers at Kosmopolis 15, as part of the programme devoted to Journalism XXI. He will be giving us Seven Reasons to Believe in a Great Future for Journalism. Data, technology, new programming languages, the social networks boom and interactivity, define in our times a journalism that, now more than ever before, is a social obligation and a challenge for avoiding infoxication.

And to make clear some concepts and discover new digital publishing tools, Bookcamp Kosmopolis, which is holding its fourth event, will also be devoted to journalism. From webdocs to interactive audiovisuals, a workshop for constructing digital narratives online will give some ideas regarding how far it is possible to go. A round table on new online narratives will feature experts in media that work with technologies and, finally, another debate will serve to speak about the new opinion leaders: bloggers, booktubers and influencers from various disciplines.

Journalism with Data and with Literature

If Gay Talese had written his article today, he could have converted it into a multimedia report where, while reading the text, readers could listen to songs sung by Sinatra or view videos on YouTube. Images would appear of his romances, fragments of his films and we could even find out the story of the bar in Beverly Hills where the interview took place or see the family tree of Sinatra’s Sicilian ancestors. Chaves Nogales wrote this book in 1934

In contrast, Truman Capote could have illustrated his report with the letters of the murderers of the Clutter family, or an infographic of the house where the events occurred and details on Holcomb, Kansas, to put the story into context. And Manuel Chaves Nogales could have used fragments of performances by Juan Martínez, photographs from Moscow of before and after the Revolution and could have added a soundtrack, the extraordinary Cantata for the 20th Anniversary of the October Revolution composed by Prokofiev in 1936.

However, these three texts function on their own, without any contemporary addition. For this reason they are three high points of a style of journalism, literary or new journalism, that not only remains current today, but that has some notable reference points. Ryszard Kapuscinski was one of them, and Jon Lee Anderson and Martín Caparrós are two other examples. The latter two will be at Kosmopolis 15, and Kapuscinski gave us a keynote lecture at the first edition.

Jon Lee Anderson began his career with a newspaper in Peru, The Lima Times, where he wrote about politics and Latin American affairs, but it is his contemporary war chronicles, published in The New Yorker, that have brought him the greatest fame. From Iraq to Afghanistan, from Angola to Somalia, Lee Anderson has covered the most conflictive events on the planet, but he has also written profiles of politicians and figures of the first order, from Hugo Chávez to King Juan Carlos I, and including Saddam Hussein, Gabriel García Márquez and Augusto Pinochet. As a result of his latest book, Che Guevara: a revolutionary life, he participated as an advisor for the film about the revolutionary leader that was produced by Steven Soderberg.

Martín Caparrós is also an expert in developing stories based on current news. His latest book, El hambre, traces a journey through the history of the lack of food in the world. “From the Stock Market in Chicago to the factories of Bangladesh, from the hospitals of Niger to the rubbish dumps of Buenos Aires, from the civil war of South Sudan to the Chinese exploitation of workers in Madagascar, from Home for the Dying of Mother Teresa of Calcutta, to the suburban death slums of Mumbai” – writes Caparrós in this preview—“I spent years touring the geography of hunger in order to tell of and analyse the greatest shame of our civilization: that hundreds of millions of people do not get sufficient food on a planet that produces more than enough food for everyone”. Anderson and Caparrós will be discussing Wars and Hunger and will try to explain how one can tell the story of a war and how to make a distant conflict feel like something close to us. And, also, about how literature may be the best tool for trying to understand that humanity continues stumbling time and again over the same stones; the incapacity to achieve peace and the chronic famine in certain areas of the planet.

The link between the history of hunger that is told by Caparrós and the data that we talked about earlier will materialise in the First Kosmopolis Data Journalism Hackathon, an innovative proposal that continues with the data journalism sessions that have been held at the CCCB to go a little further. Several programmers worked for two whole days to develop a tool that allows work on figures relating to famine and war from numerous sources. At Kosmopolis we will see the results.

Returning to Kosmopolis, then, is War, a subject that was featured in 2004 with David Rieff, Amos Oz, Ismael Kadaré and Mario Vargas Llosa, among others. And the guests at Journalism XXI will take the baton from Dan Gillmor, Amira Hass and Carles Porta, who took part in the 2008 edition to tackle, at that time, the crisis of corporate journalism and the impact of the new media. It is satisfying to be able to say that at this year’s edition, at least, we are able to see that it does have a future.